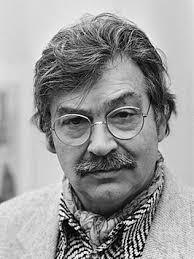 Karel Appel (born in Amsterdam on April 25, 1921) studied at the Rijksakademie van Beeldende Kunsten there from 1940 to 1943 and started exhibiting in 1946 in Amsterdam.
Influenced by Pablo Picasso, Henri Matisse and Jean Dubuffet; he joined the Nederlandse Experimentele Groep and joined CoBrA in 1948 together with Corneille, Constant and Jan Nieuwenhuys.
His 1949 wall painting in the Amsterdam City Hall caused controversy and was covered up for ten years. In 1950 he moved to Paris and then developed his international reputation travelling to Mexico, the USA, Yugoslavia and Brazil. He is particularly noted for his mural work.