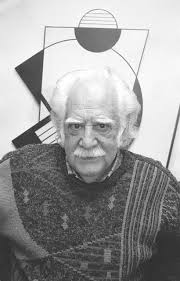 Carmelo Arden Quin is known as a poet, political writer, painter and sculptor. Quin was born in Uruguay in 1913. More than 97 years later he passed away in France. The artist lived in South-America for a long time. But later he moved to Argentina, after he first lived in his native country and Brazil. When he was 43 years old, he moved to Paris, where he lived (except for a short return to Argentina) until his death. Quin made a major contribution to the art world and left his mark by founding the international movement madi.

Quin’s style as an artist is known for his contrasting colours and geometric patterns. He therefore is an extremely important figure in geometric abstraction. One of the important characteristics of his work, for example, is the irregular formation of frames, known as the so-called ‘formes galbees’. He distinguishes himself by forms other than the traditional rectangular or square frame. This is particularly evident in woodwork and for example movable elements.

The first painting by Quin’s hand is ‘naturel morte cubiste’. Which he made in 1934. At the age of 21 he met his compatriot and sculptor Joaquín Torres García. He became his mentor and so began Quin’s art career. Under his guidance he continued to build his work. He experimented with different shapes and colours. Eventually, in 1944, he started a literary and artistic magazine: Arturo. Later, he began the madi movement, together with his fellow artists: Martin Blaszko, Rhod Rothfuss and Gyula Kosice. This happened in 1946, just before Quin moved to Paris.

The madi movement is mainly characterized by irregular frames, movable and mobile architecture, pan interval music composition and invented poetic propositions. After its start, many people joined the movement. Including painters, musicians, sculptors, writers and poets. Until today, the list of affiliated artists is expanding.

Quin was part of the Moma exhibition Latin American artists of the twentieth century’ in 1993. Many of Quins’ artworks are exhibited in the Madi museum in Dallas.

Picture at the right side by Daniel Avena.