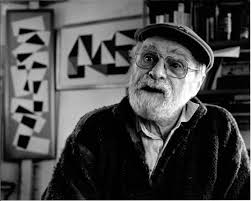 Siebren Ritserd van den Berg was born on January 14, 1913, in Tirns, between Bolsward and Sneek in The Netherlands, as second of four sons in a Catholic family. His father was a blacksmith; his mother died in 1919 of the Spanish flu. The teacher and the reverend recognize Sieps artistic talents early on, but his father would rather see him learn a trade in school. Siep obeys his father and becomes a house painter but still finds the time to create some paintings during that time. In 1937 his work is discovered by H.N. Werkman who invites him to his workshop. Although Van den Berg generally wants nothing to do with the De Ploeg artists, he gladly makes an exception for Werkman. The ensuing contact will prove to be a great influence on Van den Berg. Siep decides to become a professional art painter and hires the tea house in the Sterrebos as a workshop. After repeated visits to Paris Siep takes his art in a new direction and moves to Amsterdam in 1954. But Van den Berg doesn’t abandon Groningen. Aside from that he keeps the little tea house in the Sterrebos as a workshop and keeps in touch with the gallery De Mandelgang at the Lage der Aa, founded in 1946. He has various exhibitions there and attracts various other modern art. From 1966 onwards Siep van den Berg disappears from public life for years due to Guillain-Barré’s disease. But after that, he returns with even more abstract art. Van den Berg, which died on October 28th, 1998 is widely regarded as one the most important postwar modernists from Groningen.