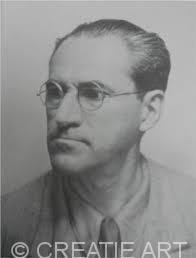 Charchoune studied at various academies in Moscow. He went to Berlin and Paris in 1912 where he attended various independent academies. In 1913 he exhibited for the first time in the Salon des Indépendants. He lived in Spain from 1914 until 1917. Between 1921 and 1924 Charchoune also contributed to various Dadaistic magazines.In 1919-1920 adheres to the Dadaist movement. In 1922 he had an exhibition in the Galerie Der Sturm in Berlin. After that, he participated in various exhibitions in Barcelona, Stockholm, Brussels, New York and Prague. That period he is interested in the anthroposophy of R. Steiner. In the 1940s inspired by the theme of water, realizes a series of monochrome paintings. In the 1950s and until the end of his life continued to work on the principles of abstraction through the music by Bach or Beethoven.
With his monochrome painting technique, his work achieves an enchanting beauty and balance.