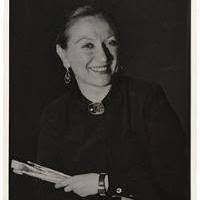 “… Art is the most complex, vitalizing, and civilizing of human activities. It is a biological necessity.”

1952 Takes a sabbatical leave. Attends the Woodstock Gallery Workshop. Is invited to the Research Studio Art Centre at Maitland Florida

1957 First one-person show at the Bodley Gallery. David Mann the director of this prestigious New York gallery will represent her and promote her work until the early 1970s

1967-1969 President of the American Society of Contemporary Artists, New York

Amsterdam, Stedelijk Museum, “National Association of Women Artists,” 1956 (with others)

New York, Congress for Jewish Culture, 1957 (with others)

New York, Society of Women Artists, December 1965 (with others)

The Audubon Artists Equity (board member 1965)

The Society of American Graphic Artists (board member 1965)

The Society of Young American Artists

The National Society of Painters in Casein, New York

MUSEUMS AND INSTITUTIONS WHERE WORKS ARE KEPT

“… My work can be called semi-abstract. Though the paintings have abstract designs, there is subject matter in all of them.”

“… I use pure intense color at times with black lines which project beyond the picture if mentally prolonged. “

“… The law of simultaneous contrasts plays a role. Light appears lighter when juxtaposed beside dark.”

“… In Helen Gerardia we have a performer in the abstract idiom. The artist is not concerned with identity as such, the interest is in color and space relationships.”

“… One of the functions of the artist today is to record feelings and to give form and refinement and direction to the inner life of his contemporaries.”

“… The work of this extremely intelligent artist has progressed steadily to the place of her present success and public acclaim.”

“… Helen Gerardia deals with the commonest geometric forms. A straight line is probably her favorite even though all she can do with it is change its position, extend it or shorten it. With this unprepossessing material she creates excellent compositions.”

“… My world is a world of deep night, blinding whites and brilliant color.”

“… Ever since the first orbit I have been fascinated by the limitlessness of outer space. This resulted in a series of space themes.”

“… My painting represents an inner truth, an aftermath of objective reality, refined by time, ripened by thought and edited by the artist.”

“… I have always been interested in the play of light and its effect on form and color and in that other quality of light, the prismatic breaking up of color.”

“… The artist is the maker of magic; the leader and prophet of his people, leading them to a better integration and understanding of themselves and a greater enjoyment of the fruits of their labor.”

“… My painting is not representational but a result of what I feel and imagine.”

“… Helen Gerardia, well-known painter of New York and Woodstock, is an exponent of the semi-abstract stemming from the cubism of Jean Metzinger and Fernand Léger.”

“…My  paintings become a part of the great beyond, a fragment of the awesome world we live in, an adventure in time and space.”

All 90 works reproduced in this catalogue have been checked, framed, photographed, numbered, stamped at the back and included in a database. Most works derive from the Estate of Helen Gerardia through Ronald Borsack, New York, the art dealer who oversaw her estate. A few are from American Auctions, art dealers and collectors. These provenances are specifically mentioned. This database serves as the beginning of a catalogue raisonné and aims to eradicate any doubt of authenticity. Needless to mention that all paintings will be sold with a certificate of authenticity (including a photo of the work with the number, description and any other relevant information written on the back).                                                                           Helen Gerardia called her work semi-abstract. “Though the paintings have abstract designs,” she wrote, “there is subject matter in all of them.” It is therefore believed that she gave each work a title. Since she used a certain composition several times, in casein, oil, acrylic, lithograph or in etching, few titles remain outstanding. As of now, there are 79; the 11 untitled works have been named Composition.