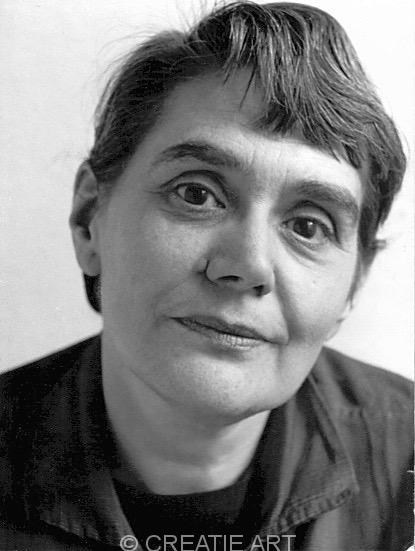 Frieda Hunziker was born in Amsterdam in 1908. From 1930 onwards she was a drawing teacher at several schools, and at the end of the thirties, she started painting herself. From a simplified form of realism, suppressing the natural perspective, she developed just after WWII into fully abstract. The works of Hunziker were noticed when on display during the mega exhibition Kunst In Vrijheid of 1945 in the Rijksmuseum. A year later she exhibited with eleven others at the Stedelijk Museum. From them, the Vrij Beelden group originated in 1947. As a member Hunziker advocated it’s principles during many lectures and tours between 1950 and 1960. At the Biënnale of Sao Paolo in 1953 the work of Frieda Hunziker, abstract and composed with an intuitive feeling for structure and colour, was on display next to pioneers of the abstract avant-garde like Piet Mondrian, Bart van der Leck and Theo van Doesburg. In 1952 she visited Curaçao, where the extravagance and playfulness of tropical nature and its rich colours and dynamic rhythms left a lasting impression on her. Although Hunziker remained mainly abstract and constructive in composition until her death in 1966, from that time forward dynamic composing and the “extrovertness” started gaining the upper hand. Before she composed very consciously with geometric shapes and structures with a general feeling of consideration, but now she used a sprawling vitality with many dancing, brightly coloured figurines and an expressive, pastel-like way of painting, in which the shapes and structures simply flowed forth from the way she used her brush and colours.
Frieda Hunziker is widely regarded as an important and innovative Dutch painter. Her works are included in many exhibitions at home and abroad on the Dutch post-war abstract-expressionism.