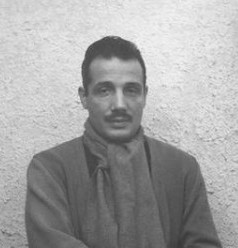 Born of Greek parents. After study at the Munich Academy, he returned to Egypt and exhibited regularly at the Cairo Salon. Served with the Hellenic Air Force during WW2. Settled in Paris in 1948. Followed drawing lessons at Fernand Léger’s studio. Did not join a group, but worked alone and independently. Made abstract work of juxtaposed keys with which he filled the surface of the canvas. Refined use of color. A number of his works show a certain affinity with Mondrian’s chessboard-like works from 1919.
In 1959 he settled in Bergen in Holland with his wife Paulien Eecen, a sculptor. This made his palette clearer and the surface division in his works is also attributed to the design of the Dutch polder landscape.