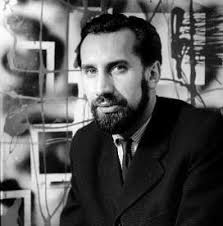 After service in the armed forces and internment as a prisoner of war, Zangs began to study at the Düsseldorf Art Academy in 1945. While travelling both in Germany and abroad, he produced a great deal of purely figurative work, which was exhibited in 1950 at his first one-man show at the Kaiser Wilhelm Museum in Krefeld. In 1951 he went to Paris for the first time, where he met Wols. That same year Zangs moved into a studio of his own in the Künstlerhaus in Sittarder Strasse in Düsseldorf, where he did his first abstract work. In the 1950s the artist earned his living primarily by accepting commissions for figurative work so that he was able to develop his own abstract style on the side.

Zangs was awared the Art Prize of the city of Krefeld in 1952, followed in 1958 by the Franklin Institute of America prize and, in 1962, the Europe Prize for Painting awarded by the Ostende Biennale. Restless by nature, Zangs then spent a few years in the South of France (1962-65), followed by numerous trips abroad, before finally settling in his native Krefeld in the early 1980s, where he died in 2003.

Of Zangs’s many friends among his contemporaries, Wols and Lothar Quinte have perhaps exerted the strongest influence on his work. His oeuvre can be divided into several stylistic groups, such as the ‘Ver-Weißungen’ (‘Whitening’), the ‘Rechenzeichen-Collagen’ (‘Mathematical Signs Collages’), the ‘Scheibenwischer-Bilder’ (‘Windscreen Wiper Pictures’), ‘Pinselabwicklungen’ (‘Brush Processing’) and ‘Peitschenbilder’ (‘Whip Pictures’). As clearly distinguishable from one another as these groups are, they all bear the artist’s unmistakable signature. A new reception of work followed on the 1993 exhibition ‘Das offene Bild’ (‘The Open Picture’) of his work in the Westfälisches Landesmuseum in Münster.